Global markets ended the first quarter of 2019 with very positive returns and domestically, the DJIA, S&P 500, Russell 2000 and NASDAQ all rewarded investors with double digit gains. The S&P 500 recorded its strongest quarterly performance in a decade, rising over 13% and leaving the index 3% off its all-time high. NASDAQ did not perform as well as the DJIA or S&P 500 on the final week of the quarter, but its 16.5% gain for the first quarter was nothing shy of remarkable.

There were a lot of positive developments on the quarter, but the ones that seemed to dominate headlines throughout and contribute to the markets positive moves were the Federal Reserve’s change with respect to rate hikes, mostly positive economic data points, solid corporate earnings results and guarded optimism that a trade war with China will be averted.


This is the best three-month start to a year in a decade and we are closing in on unchartered territory as far as bull markets go. For perspective, consider that since 1975 there have been 20 quarters with gains of 10% or more. And glass-always full optimists will tell you that over the year following those quarters, the stock market was up 80% of the time, with an average return of 11.8%.

But as always, past performance is no guarantee of future results. 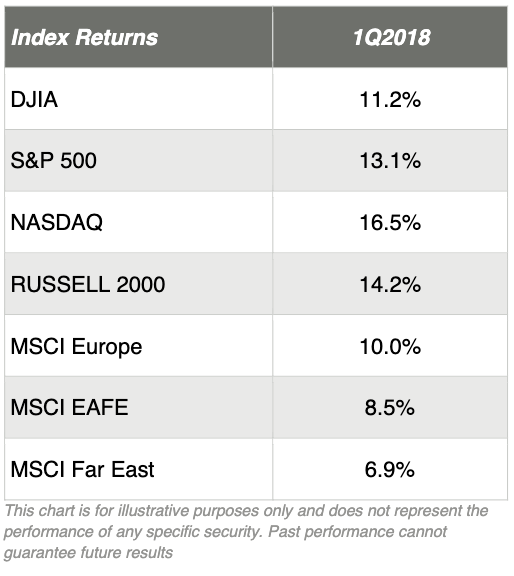 
For the quarter, all 11 S&P 500 sectors were painted green, with 7 of 11 in double-digits, pointing to broad-based market growth. Information Technology, Industrials and Real Estate were the best performers while Health Care and Financials struggled.

And only Materials and Financials were painted red for the 1-year period ended March 31st.

The Fed Signaled No More 2019 Hikes

In mid-March, the Federal Reserve decided to leave the fed funds rate unchanged at 2.25-2.50%. While this was widely expected, the Fed also surprised some with its signal that it does not expect any more rate hikes for the rest of 2019, which was different from just a few months ago this past December when they signaled two 2019 rate hikes. The Fed also mentioned that it would end its balance sheet selloff by September 30th.

News of the Fed’s decision pushed the 10-year yields to 2.44%, which was their lowest level of 2019 by a healthy amount, until they dropped further to end the quarter. But it also pushed the difference between 3-month Treasuries and 10-year Treasuries to briefly invert, which has not happened since 2007.

In fixed-income markets, interest rates continued to trend south, mostly due to the Fed’s pivot towards no more rate hikes in 2019:

The 10-year U.S. Treasury – the benchmark used to decide mortgage rates and the most liquid and widely traded bond in the world – steadily declined for most of the quarter and has declined consistently since November 2018, when it stood at 3.24%, until it eventually came to rest at 2.41% to end the first quarter of 2019. 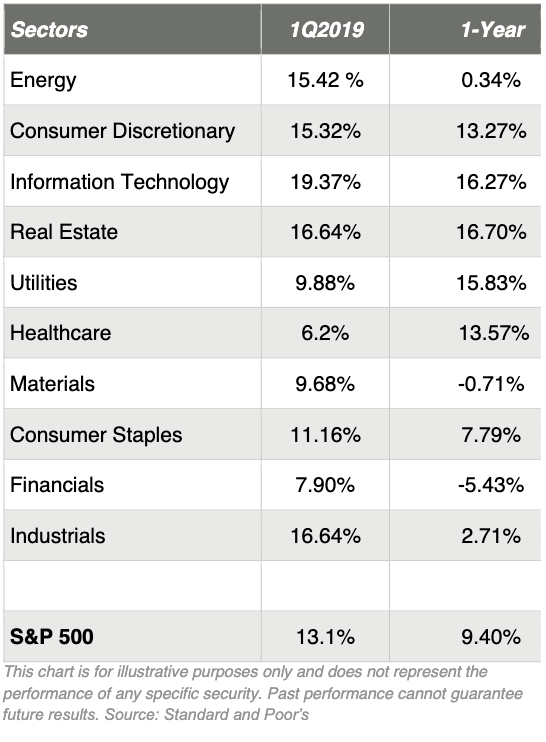 The latest reading on GDP was released toward the end of the quarter and the numbers from the U.S. Bureau of Economic Analysis showed that the U.S. economy expanded at a 2.2% pace in the final quarter of 2018, bringing U.S. GDP growth to 2.9% for all of 2018. While just short of that magical 3% number, it was the strongest growth since 2005 (technically tied with 2015). But glass-half-empty economists are quick to point out that GDP growth is slowing, as the second quarter of 2018 clocked in at 4.2% and third quarter 2018 came in at 3.4%.

The Price of Gas Kept Inflation in Check

In March 2019, gasoline sold nationwide for $2.54 per gallon, which was 23 cents more expensive than the last month. But a year ago, the average price of gas was exactly the same.

The current bull market celebrated its 10th birthday this quarter and equity investors got all the gifts: very hefty gains. With stocks rising to fresh 2019 highs, the markets now sit less than 3% below their all-time highs, with the S&P 500 delivering returns north of 400% over the past 10 years.

Here are some perspectives on the last decade:

The first quarter of 2019 will be remembered as one investors would love to repeat.