Over and over we have talked about the negative effects of global money printing. The focus has always been on the Federal Reserve, The European Central Bank, and The Bank of Japan for their money printing escapades that have dwarfed anything in the history books. Recently, The Bank of Japan has been front and center due to their aggressive money printing and investments. The Bank of Japan not only invests their newly printed money in forex, but they also invest in debt and equities of Japan. The BOJ buys ETF’s (Exchange Traded Funds) on a regular basis and has become one of Japan’s largest public shareholders. Both the Bank of Japan and the European Central Bank have grown their balance sheet more than the Federal Reserve. In fact, the Bank of Japan’s balance sheet is almost 5 times larger in proportion to GDP…and is still growing. Check out the chart below and look at the difference. And you thought the US overdid it…

Chart courtesy of Thoughts From the Frontline

But, there’s one central bank that’s has done something even more stunning…The Swiss National Bank. If you can believe it, the Swiss National Bank (SNB) has expanded their balance far more than the Federal Reserve, European Central Bank, or the Bank of Japan. The Federal Reserve’s balance sheet is $4.5 trillion which equates to about 25% of GDP. By comparison, the SNB’s balance sheet is $813 billion which is nearly 125% of the Swiss GDP! Of the $813 billion, $90 billion is invested in equities while the other $670 billion is invested in the Euro and US debt securities. The SNB has certainly had a good year being invested in US Equities especially when you look at where that $90 billion has been invested (shown in the chart below). But, what happens when they want to liquidate their portfolio? The SNB will have a huge hurdle to overcome. If anyone gets a hold of the news that the SNB is liquidating, all the buyers will disappear. It’s not like you can put 19 million shares of Apple on the open market and get filled! 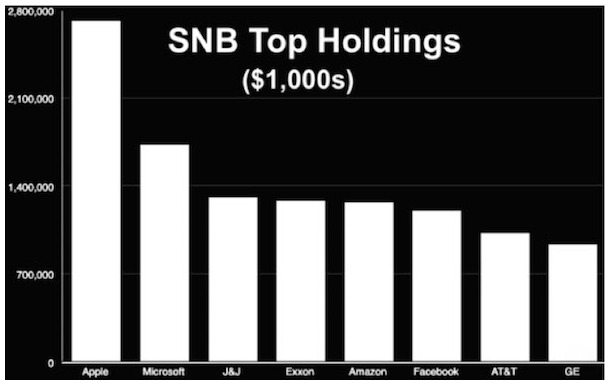 Chart courtesy of Thoughts From the Frontline

“The SNB owns about $80 billion in US Stocks today (June 2017) and a guesstimated $20 billion or so in European Stocks.”

“They have bought roughly $17 billion worth of US Stocks so far this year. And they have no formula; they are just trying to manage their currency.”

“Think about this for a moment: They have about $10,000 in US Stocks on their books for every man, woman, and child in Switzerland, not to mention who knows how much in other assorted assets, all in the effort to keep a lid on what is still one of the most expensive currencies in the world.”

“Switzerland is now the eighth-largest public holder of US stocks. And apparently, they are concentrating on the largest of the large-cap stocks. They own 19 million shares of Apple (as of March 31). That is roughly 3% of the current market.”

If this scheme ends in anything other than a complete catastrophe for the SNB, I would be very surprised, but hey on paper those 2017 gains are HUGE. So, they have that going for them which is nice.