Oh, Tesla, the poster child of excesses. Your shit show awaits. Here's one you may have heard...A CEO deceived investors by leading them to believe that its key product (a portable blood analyzer) could conduct comprehensive blood tests from finger drops of blood. Low and behold, the product can't produce the results it claims and $700 million of investors' money vanishes. This is Elizabeth Holmes and Theranos. Holmes was hailed as a brilliant CEO and visionary of the medical and tech world. She could do no wrong. Money piled into her product without any proof of the product's validity. Why would I bring this up? Because we believe, Musk is not the prophet everyone believes him to be, and in fact, has deceived investors in a number of ways. Musk constantly provides outrageous comments and blatantly erroneous forecasts. One of the major differences between Musk and Holmes is that Musk is going to lose billions of investor money. There's no reason why this company should be valued at $51 billion (as you'll see below). Musk can do no harm in the eyes of his "fans." There's no amount of bad news that skews their view of Musk. As I observe Musk from a distance it certainly feels like he has deceived investors by baseless proclamations about the Model 3's forecasted production numbers and the suspicions of fraudulent accounting activity evidenced by the 85 letters/investigations, which may have led to a number of top finance people leaving the company. Of course, Musk may not take his deception to the depths of Holmes, but that doesn't negate his constantly false rhetoric. Musk has a way of manipulating reality and taking the focus off the real issues. There are enough Musk supporters that this actually works. There's no doubt Tesla is now on the verge of bankruptcy.  Let's look at some statistics and charts from Grant Williams of "Things that make you go Hmmm" newsletter to see if Tesla truly is in dire straights. 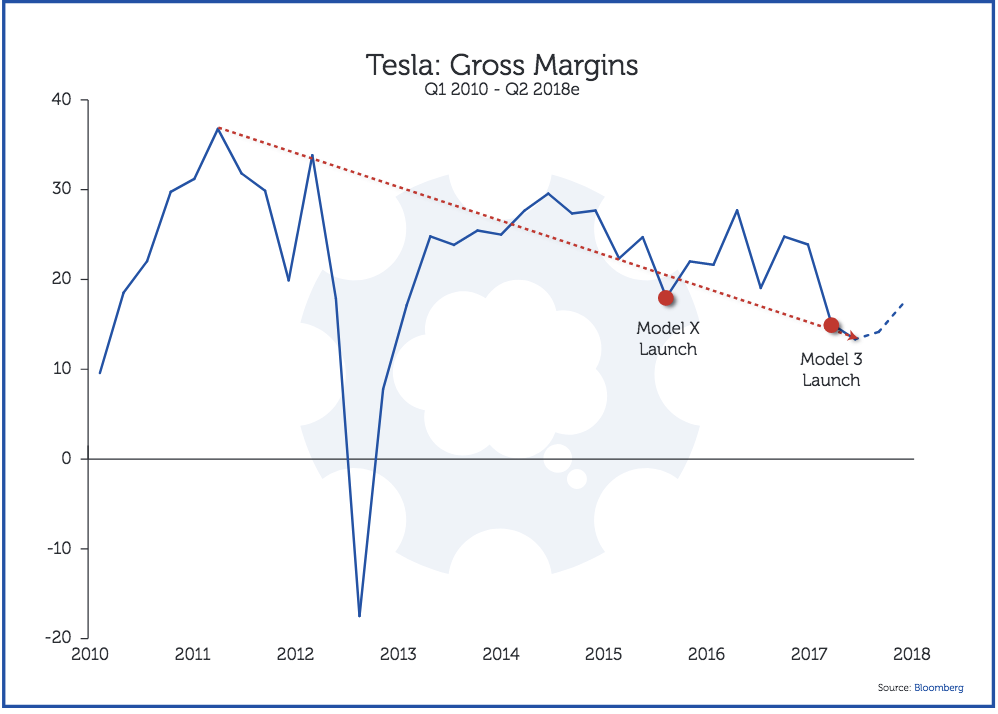 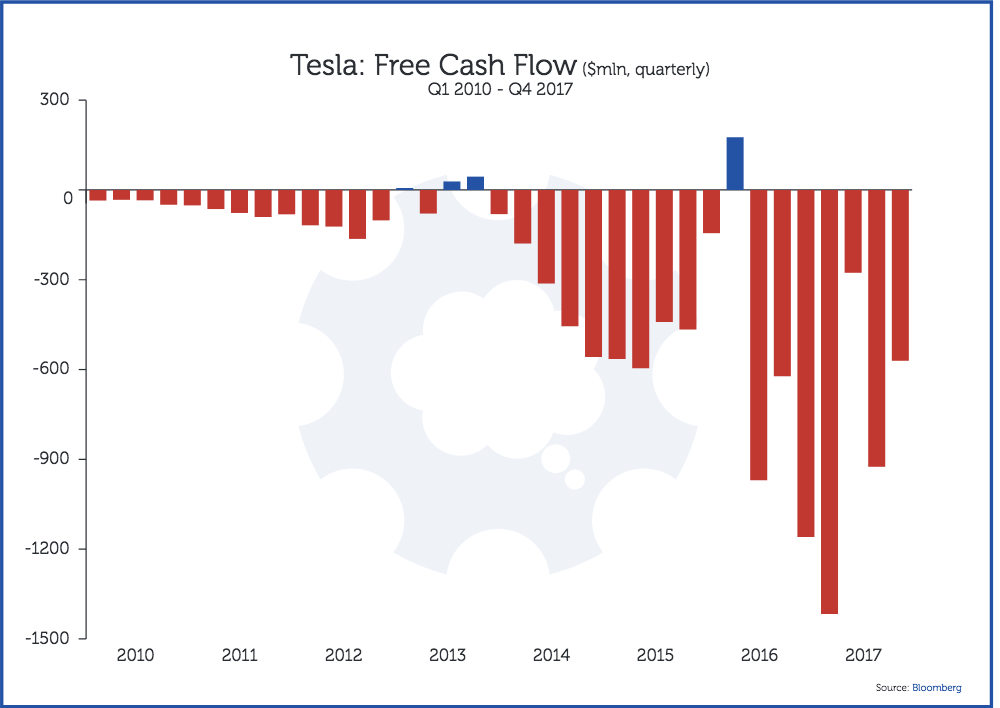 Tesla's cash flow is a thing nightmares are made of. 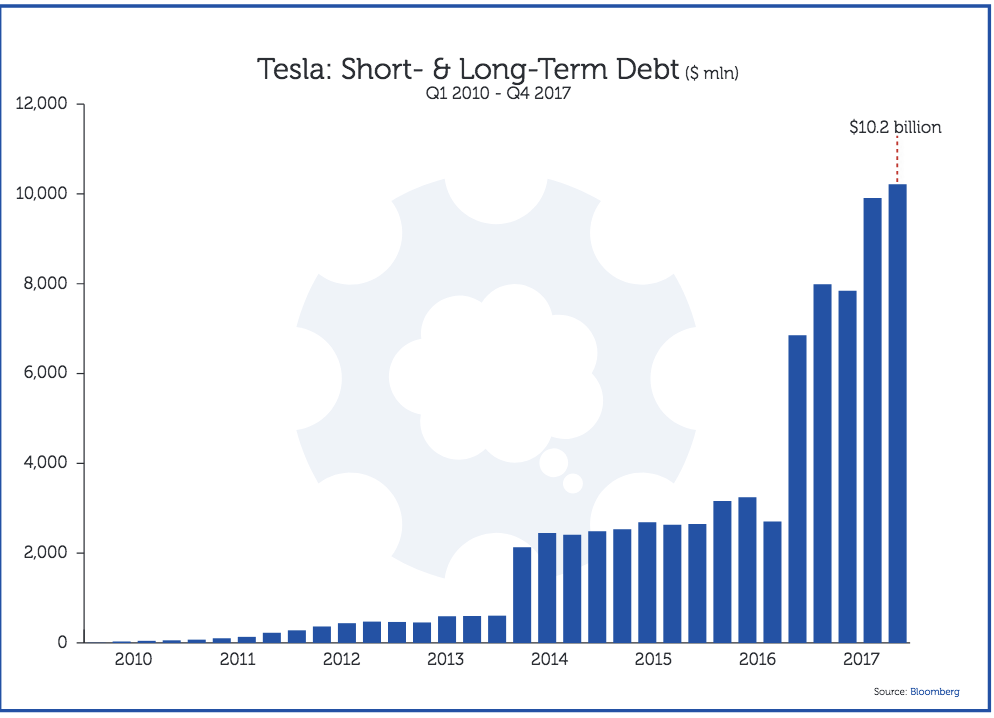 Tesla's outstanding debt load is now $10 Billion (No big deal, Musk is a magician). Marketwatch's Potenza states, "There are no restrictions on the company issuing further unsecured debt, on selling assets and on paying dividends or making investments. There is nothing to stop them from issuing notes on the same terms in an unlimited amount going forward. Finally, the notes don’t even have the call protection of an investment-grade bond, which means the company could refinance them at a lower level in a few years time." 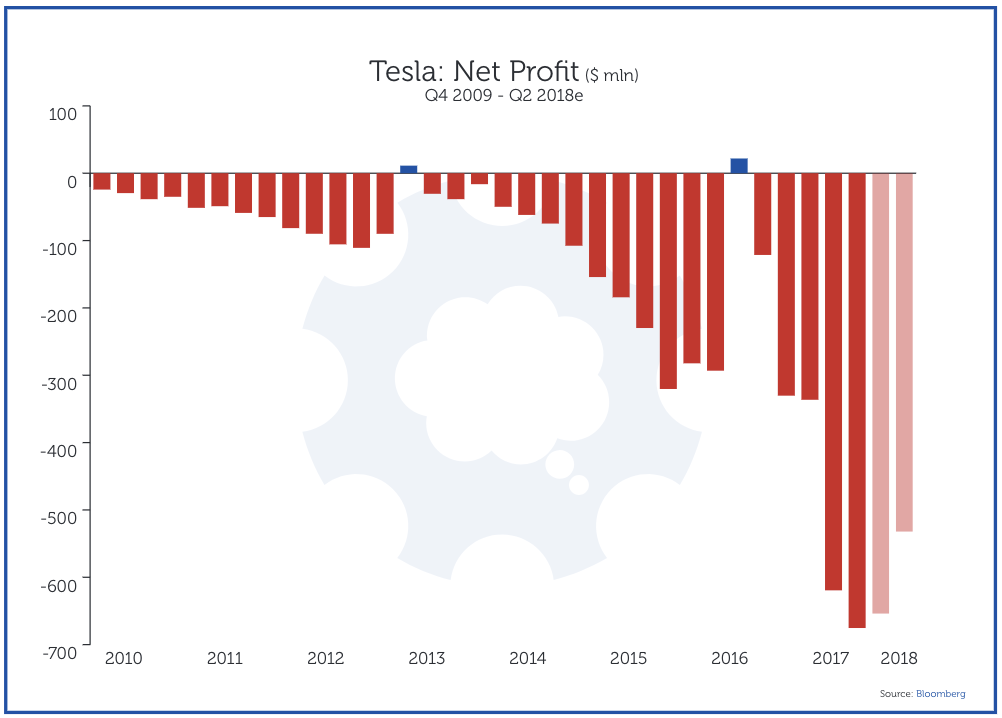 Tesla's Net Profit is solid...ly in the red. Tesla burns through billions of dollars per quarter. 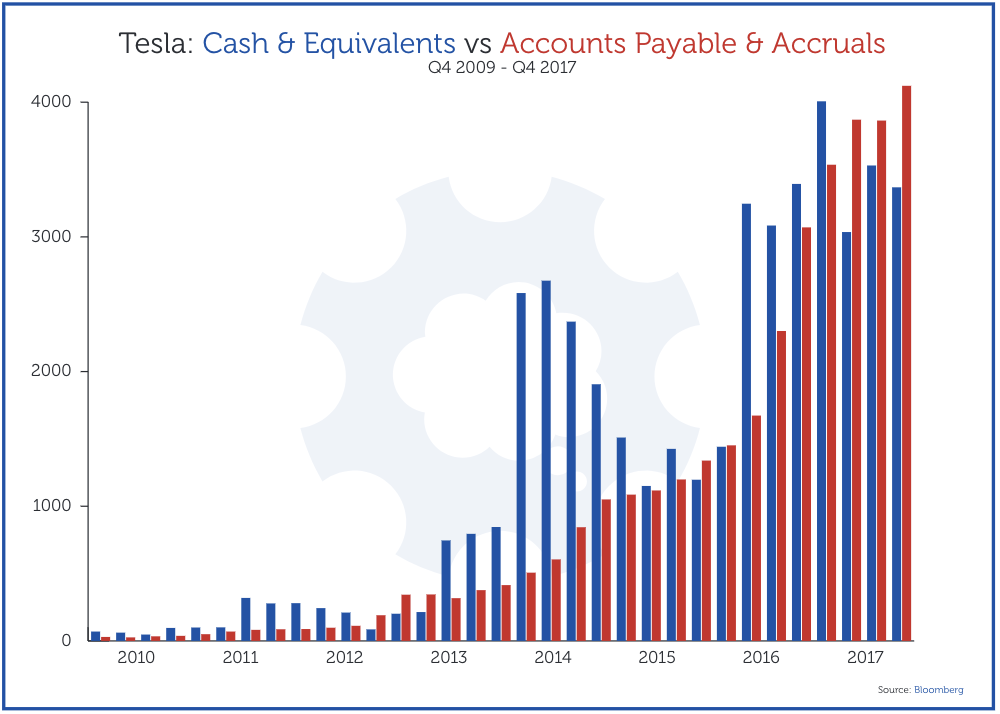 I'll let Grant Williams take it from here...
"The company’s balance sheet is also in terrible shape with cash in the bank (and cash equivalents) now at levels which bring into play the possibility of a fully-fledged ‘run-on-the-bank’ – particularly given the fact that 25% of all the cash Tesla has on hand is refundable customer deposits and, with all the negative news flooding the media ... (and deteriorating over the weekend), I would expect plenty of those customers to want their money back sooner rather than later. As if that wasn’t enough, the company’s net interest expense (which has more than doubled over the last twelve months against a backdrop of rising rates) has now reached almost half a billion dollars or roughly $5,000 per car sold. That means (as Mark Spiegel points out, that “fully one-third of Tesla’s gross profit goes towards servicing its debt!”

"The company cannot survive the next twelve months without access to capital from Wall Street Banks or private investors. We estimate that Tesla will need roughly $8 billion in the next 18 months to fund operating losses, capital expenditures, debts coming due, and working capital needs. However, it appears that due to past SEC investigations and current investigations (which terrifyingly have not been disclosed by the company), it will likely be difficult for Tesla to access public markets. According to a recent analyst report, there have been 85 SEC requests for additional information and disclosures in the last 5 years. When a company is under formal investigation, it is difficult, if not impossible, to raise capital from public markets as these investigations must be made public, which generally craters the equity and debt values. Therefore, Tesla investors better hope there are a number of Greater Fools in China or elsewhere to keep the company solvent. At some point, the music stops and there aren’t any open chairs."

Recently, Tesla came out with their quarterly earnings report from the most recent quarter. They had a $710 million loss, $1.1 billion cash burn in the quarter, $380 million jump in accounts payables and accrued liabilities from the December quarter. There is no company on planet earth that burns more cash than Tesla with no letup in sight. As interest rates rise, the cost of their debt will dramatically increase ultimately bringing this company to a screeching halt. The drugs will finally wear off and reality may finally set in. Buyer beware.

This was an excerpt published on May 11, 2018 from The Forecast Report, authored by Chief Investment Strategist, Jason C. Hilliard. If you would like to read the entire report you can sign up for our newsletter here.