The Forecast Report November 2019 - Double Down!

"Politics is the art of preventing people from taking part in affairs which properly concern them." - Paul Valery

In our previous newsletters we talked about the Repo Market and how the Federal Reserve is providing huge injections of liquidity into these operations. The Fed has been providing liquidity to the Repo market since September 17, 2019 and this operation is still ongoing. Since September 17, 2019 the Fed has poured over $3 trillion into the Repo Market. Investors are embracing the new liquidity as they have in previous bouts of Quantitative Easing through the last decade of this bull market. The reality is that the Fed is doubling down on the mistakes they have made in the prior two boom and busts, except this time it’s not just affecting the tech industry or real estate industry...it’s affecting nearly every global asset class. QE 4 is off to the races and many investors have turned a blind eye to the increasingly dangerous issues developing throughout the global economy. Investors have gone back to partying like it’s 2012. 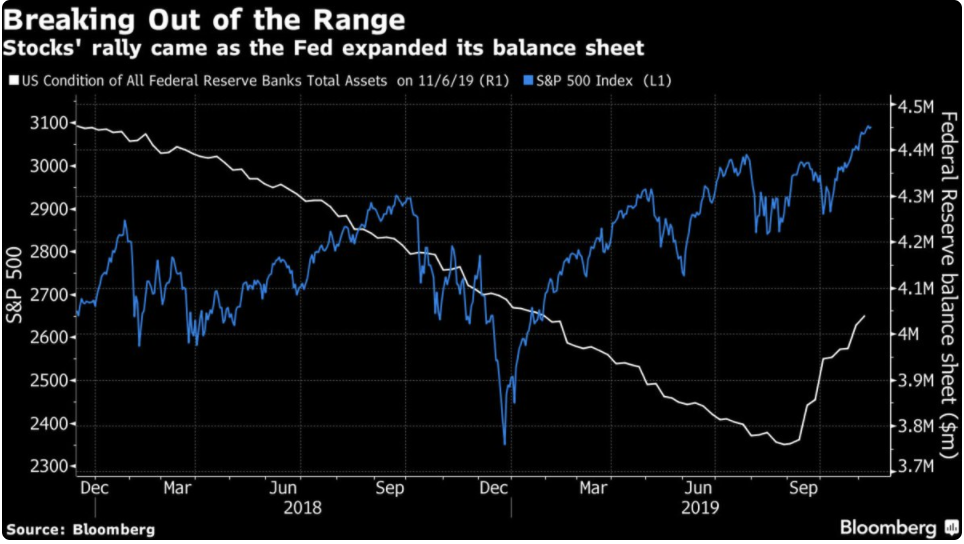 Over the course of the last couple of months I have read and watched and number of interviews with famous and “under-the-radar” investors. The point they try to make is how difficult it is to short US equity indexes in this liquidity fueled Fed party. If anyone has attempted to short a stock or index before they understand how difficult it really is. First, your risk of loss is unlimited due to the stock, hypothetically, being able to rise forever. Second, you’re going against the grain. Most investors find it very difficult to short a stock due to our inherent optimism and the difficulty of getting past the idea that you are betting against an American enterprise. Many believe short sellers are pure evil picking away at companies until their stock values begin to fall, which causes panic in the marketplace and destroys "fine firms." Nothing can be further from the truth. Many short sellers look at investments with a more critical eye than the average investor and this could potentially provide a benefit to those looking into these investments. As we see in the current market environment, many times long only investors are blinded by euphoria and optimism and there’s no one to hold these companies' feet to the fire. Many times short sellers become the “canary in the coal mine” for certain stocks (Ex: Marc Cohodes in MiMedx) being the first to expose fraud or malfeasance at these companies. The fact of the matter is that short sellers are important for price discovery whether that price discovery is related to indexes or individual stocks. Right now we have zero price discovery, thanks to the Fed.

The difficulty of shorting is the effect of Fed liquidity and the constant barrage of Presidential tweets about a China-US trade deal. When you have QE to infinity prices are not based in reality, and as such, can be pushed higher and higher without any tether to reality. Yesterday, I was watching an interview with Jim Chanos, famed short-seller, about Tesla. It was a live interview at the time. He explained his reasons for shorting Tesla with the conclusion that Tesla should be valued at zero. (NOTE: Elon was on the call with an endless barrage of derogatory questions aimed at Jim Chanos). Now, I don’t know what rabbit Elon is going to pull out of the hat, but over the past 5 months Tesla has absolutely screamed higher and is butting up against its highs from August 2018, so for now, it's sunshine and rainbows for Elon. Chanos, among many other famed short sellers, understand that the numbers don’t add up with Tesla. They are $15 billion in debt, are trading at 7x revenues (many multiples above any other car maker), and their sales are falling. Chanos goes on to say that the real reason any of these companies can exist and still exist today is cheap money vis a vis the Federal Reserve. If and when rates do decide to rise, not only will Tesla be in big trouble, but many companies built on cheap money will be as well. But, public perception has not changed and with the famed cheerleader CEO hurling bullshit every couple of months about “amazing-change-the-future plans” it’s really tough to make any headway on the short side of things. It’s the equivalent of a Presidential tweet in the corporate markets and blatant market manipulation to the detriment of many short sellers. Many people believe short selling is shot dead as many companies have a very low short interest.  Right now a company’s valuation is not a catalyst for shorting the stock, but these expensive stocks are on borrowed time as we are now entering a slowing cycle during the end of a bull market, which will soon be a short sellers dream come true. But, at this point, in order to make any money on the short side you better be nimble or have a shitload of money to sit in a trade like Jim Chanos or else you risk going out of business like Mr. Russell Clark.

Earnings Suck and Other Bad Data.

With US Dollar strength combined with late cycle wage inflation we are starting to see and realize it is affecting earnings growth in Corporate America. We are of the belief that Wall Street is overly optimistic  in stating that a recovery in earnings in 2020 is probable. Take a look at the current 2019 Q3 earnings by sector. 462 out of 500 companies have reported sales and earnings for Q319. We have S&P 500 earnings down 5 percent over the past year, which is the largest decline since Q4 2015.

Additionally, unemployment is rising in many areas of the United States. When we have higher wage growth plus a slowdown in earnings = an eventual cut in the labor force. This is going to get worse before getting better. At least we have a huge bean deal with China...wait, don’t we have some amazing bean deal? 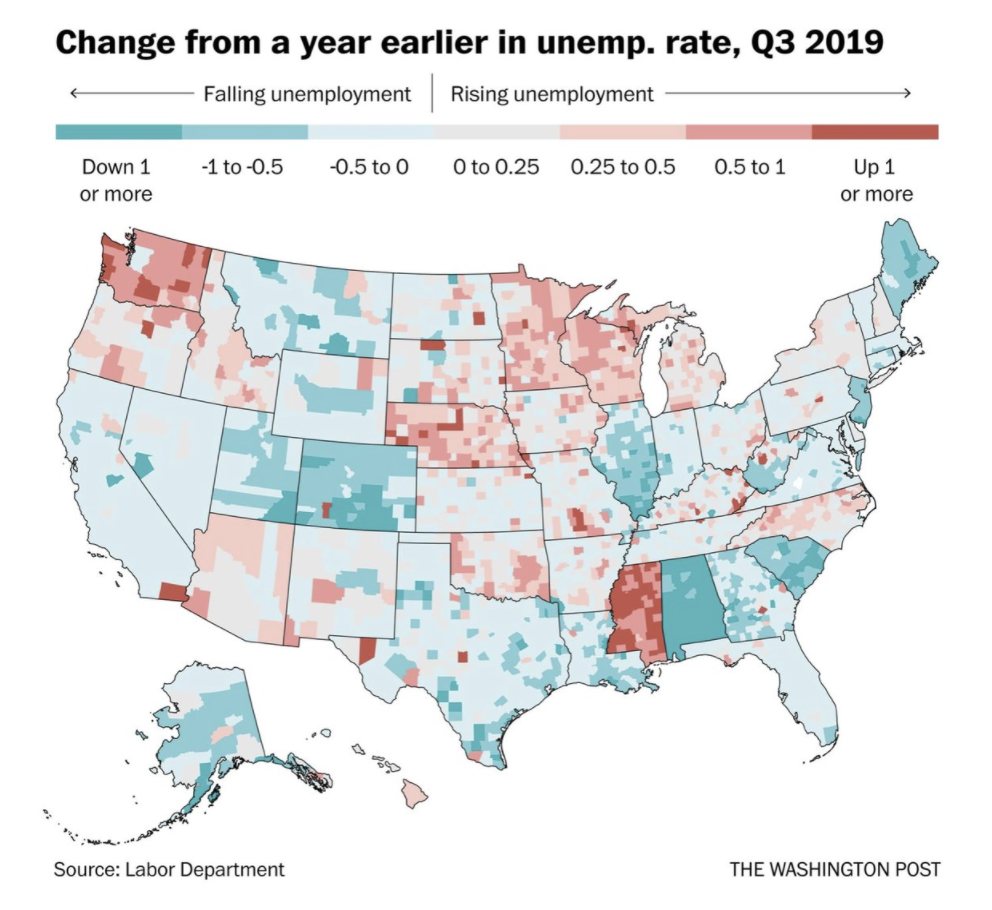 CEO’s are aware that something very nasty lurks behind the Fed’s liquidity project. But, consumers are blissfully unaware. CEO’s are selling massive amounts of company stock locking in gains for their personal gain before things go sour leaving your average investor as the buyer holding the bag. 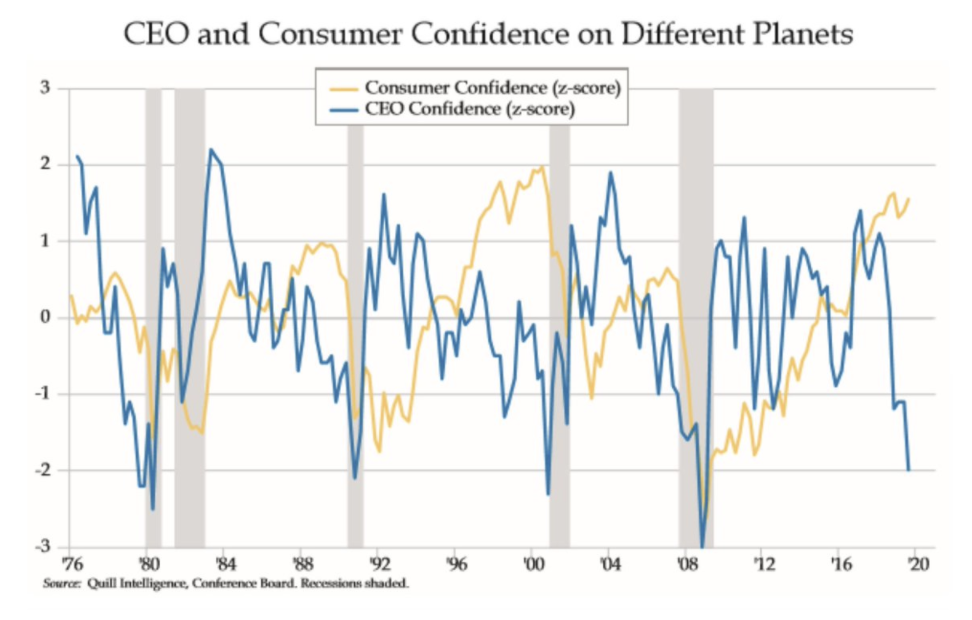 Also, margin debt is at a critical point. Margin debt is money borrowed by an investor to purchase more stock. In the past, margin debt has rolled over before any break in the market. Margin debt is currently testing its 2016 lows. In other words, investors are becoming more risk averse.  If we see margin debt break that area of support it will be another indicator pointing to the fact that this market is skating on thin ice. This indicator has been quite accurate in predicting bear markets in the past as you’ll notice in the chart below. 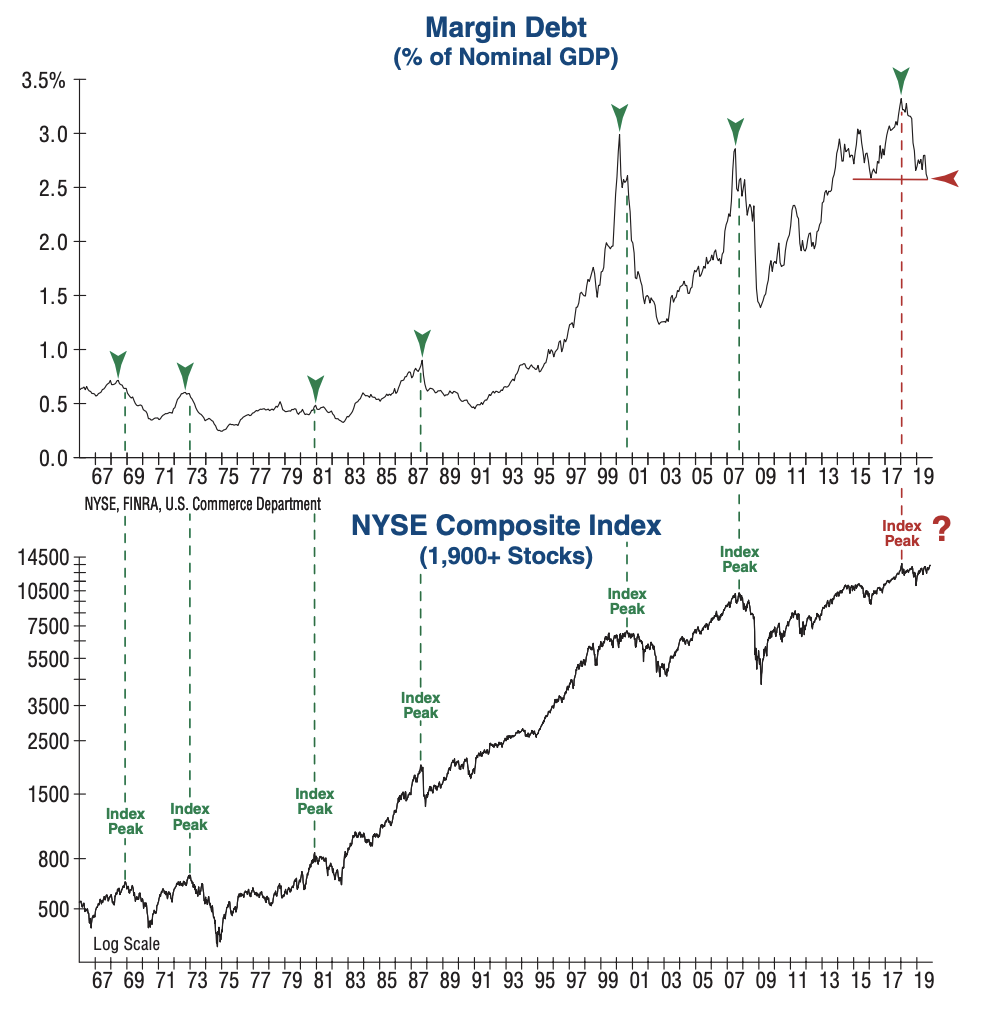 Honestly, I thought I was done talking about the “short the VIX” trade at the end of last year, but I have to point this insanity out. We now have the largest net short position in the VIX IN HISTORY. Look at those green lines on the chart. Once again we have extraordinarily low volatility, but speculators are still comfortable picking up pennies in front of a steam roller. In other words, these traders are betting against any spike in volatility to an extent that hasn’t been seen before. You might ask, well, why don’t you just go long volatility and go long? Honestly, it’s the same question I asked myself. Why would you not take the other side of that trade and go long volatility? I'll explain. 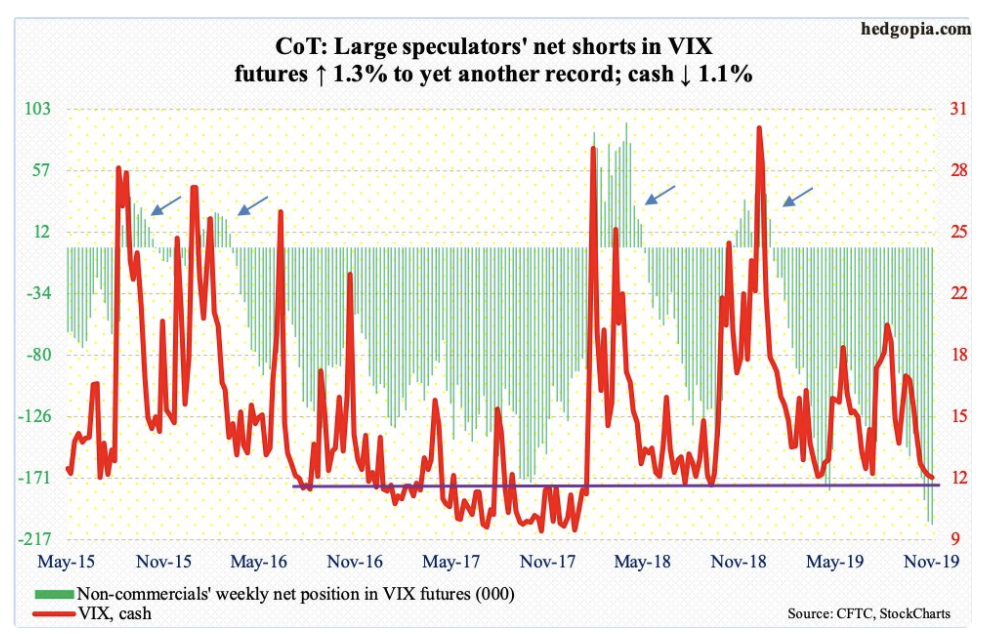 Volatility is a different beast than your typical futures contract on corn or beans or oil, etc. Let’s take an example of why going long isn’t practical. (NOTE: I was schooled on this subject by a good friend and hedge fund manager Matt Peluse). Let’s say I believe that volatility is going to spike sometime within the next 6 months. So, I buy a June 2020 option with a strike price of 30. Furthermore, let’s say that 3 weeks after I buy this option contract, sometime in December 2019, the market takes a dump and volatility shoots through the roof. What do you think happens to my June 2020 option contract? Well, if you’re like me, you do a little dance and shout “I just got paid.” Not so fast. If you look at a chart of volatility below you can see that there are short bursts of rising prices and then, just as fast, it falls. It’s called regressing to the mean. Volatility ALWAYS regresses to the mean. So, getting back to our scenario, what will happen to our June 2020 option contract? It’s highly probable speculators believe that volatility will decrease from its current spike by June 2020. As such, the pricing of the option really doesn’t change all that much and as you hold this option longer and longer and it gets closer to your expiration date you have time decay eating away at your investment. 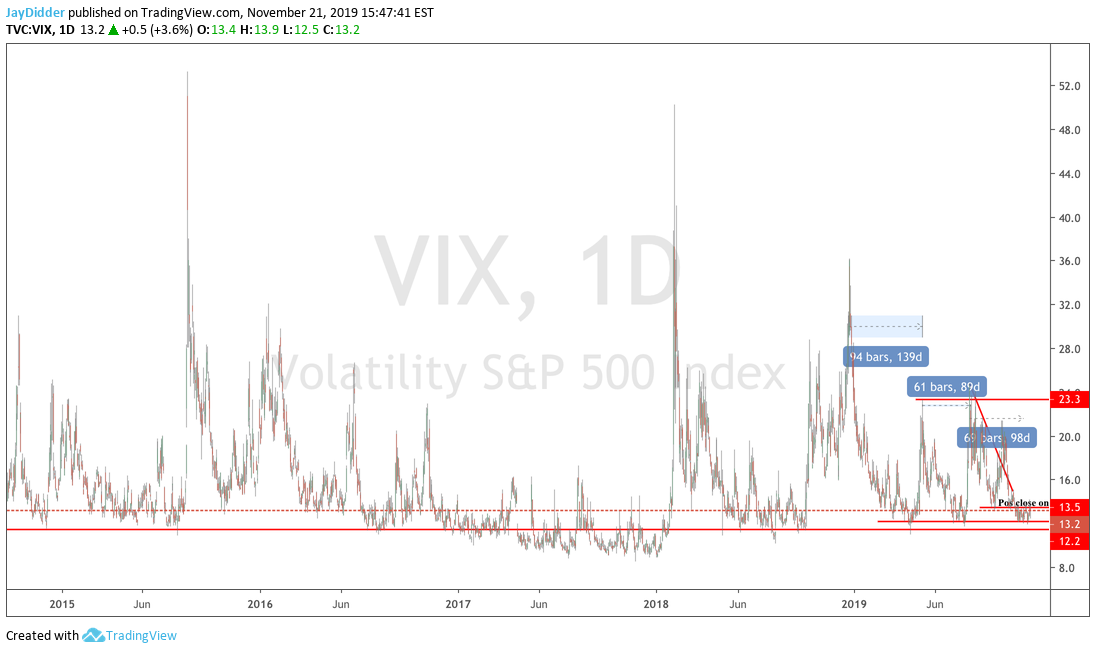 Now look at the next chart below. This is an ETF you can easily trade that is supposed to move with the VIX futures contract. The VIX futures contract really hasn’t moved much at all since October 15, 2019. But if you look at UVXY during the past month, it has slowly eroded to the point it has lost 25 percent of its value due to time decay of short-term futures contracts underlying the ETF. The reality is that in order to play the long end of the VIX trade and come out profitable it MUST be a short-term trade (Days) AND you must be lucky as hell or can see the future. If either of these apply to you, please call my office immediately, we have a position for you. 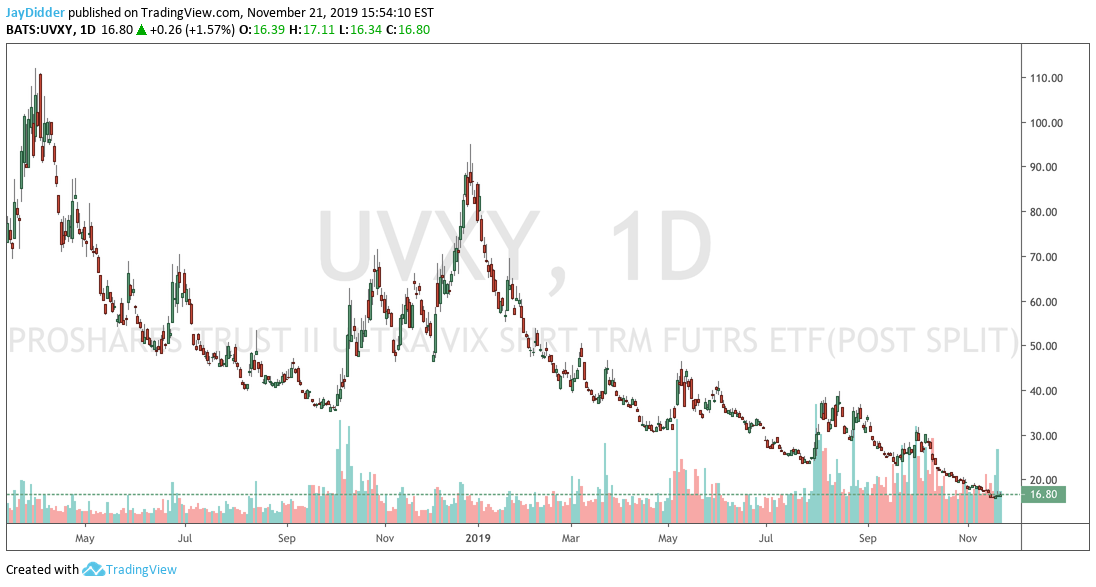 The Wonderful World of IPO’s

After writing the majority of this report I realized I left out one important point I wanted to make regarding the IPO class of 2019. Now, let’s think back to the Dot.com bust of the early 2000’s. Some of us remember that many of the companies that went public didn’t have much of a business. They had an idea and .com at the end of their names. These companies needed to raise money to finance their idea, so they went to the public markets. You probably remember thinking, after the fact, how in the world can you go public with nearly zero revenue and have someone invest, right? I would agree until you look at 2019. More capital was raised by unprofitable companies in 2019 than in any year during the Dot.com mania. And profitable companies...well, who really needs profits when you have easy money bro?

Most of these IPO's have been clobbered in 2019 versus the S&P 500 as you can see in the chart below. 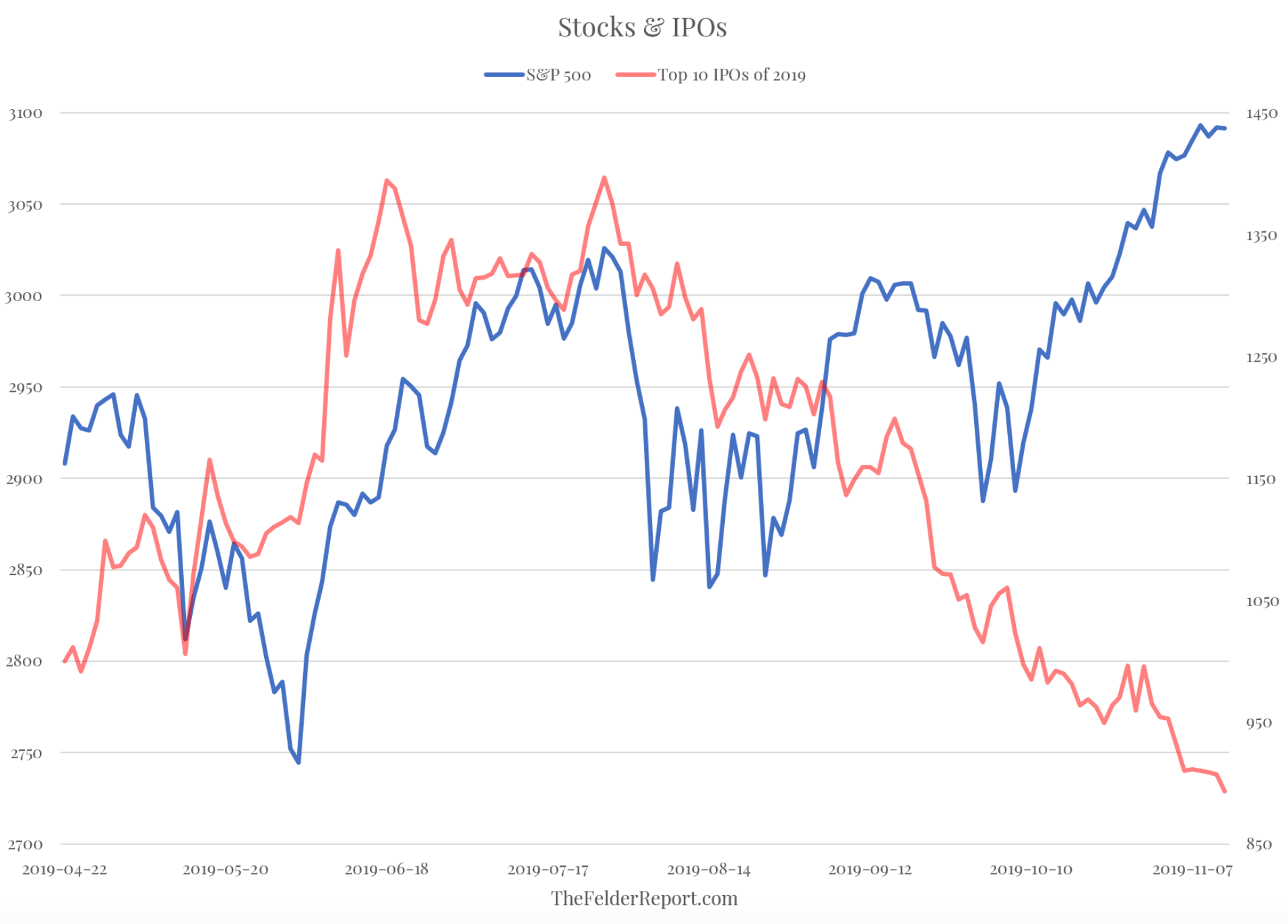 These stocks have been absolutely pounded in 2019, and for good reason. Just look at the top IPO’s and their profit margins! Slack should turn a profit in...2050. 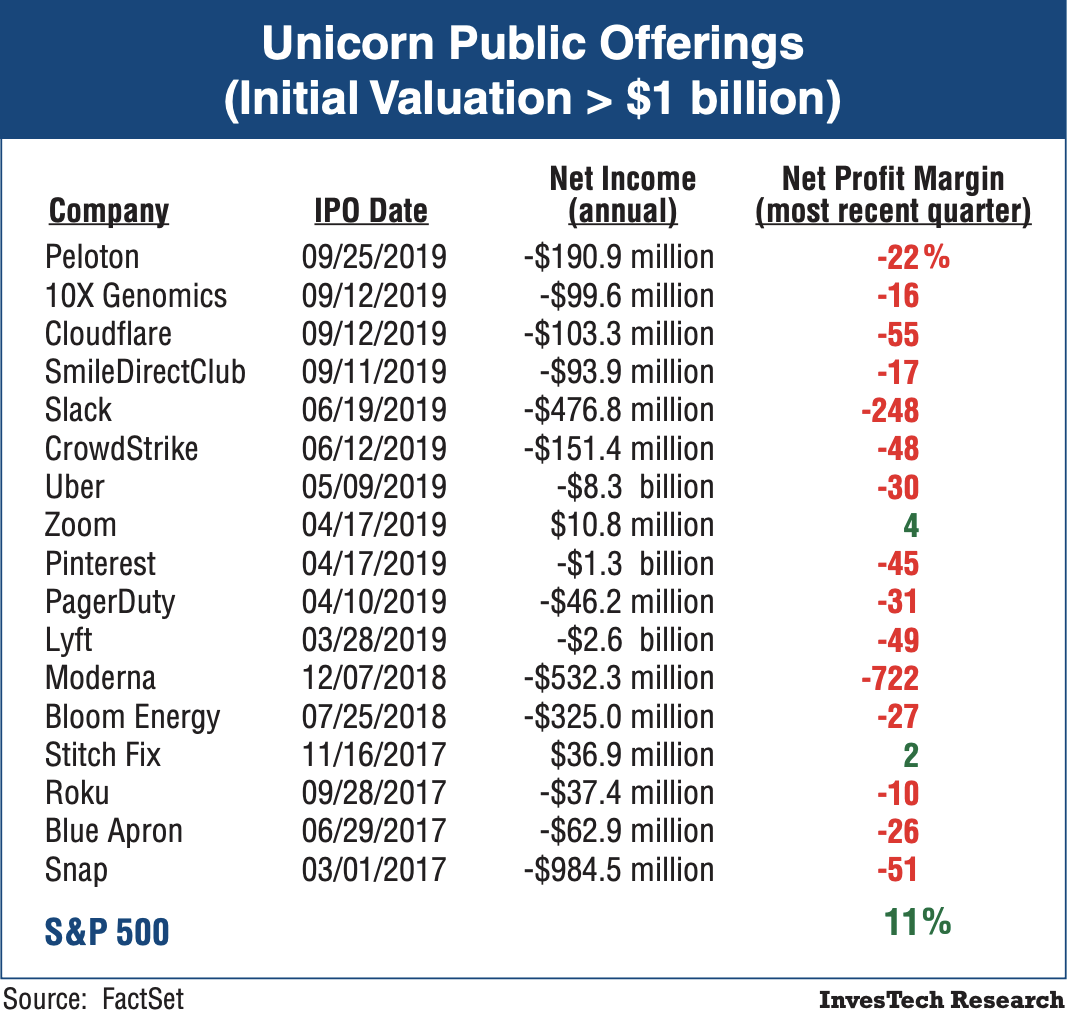 These IPO’s provide a great example of what easy money can do. It can take companies with no profit to speak of and no real plan to generate profits and bring them public (Exception: WeWork). We are just now starting to see that investors are not enamored by these shiny objects and they are getting hammered for extremely bad business models.

Have a wonderful weekend and stay warm! We'll see you next month!